Review: This Film Is Not Yet Rated (Spoilers) 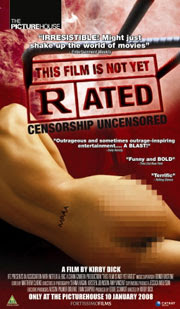 This indie documentary film is a exposé about the US movie rating system.

The system is manage by the ultra secretive (almost CIA-like) organisation - MPAA, funded by the major studios, which the unnamed raters and board of appeal members decide the rating of movie, which in turn affects the audience who will be watching the film.

The board seems to run on a totally opinion based, unprofessional fashion with any guidelines. It seems pretty scary that a batch of old timers without any formal training and credentials (either than being parents) are the ones who will decide the fate of your hard work.

The movie is done in an informal manner with sarcastic humour. The director cleverly put up a case for us to consider the loopholes of the system and empathise with plague of the independent directions.

Overall, an engaging and funny movie for people who will like to see something different from the usual blockbusters.

PS: However, I believe compared to what is available in US, even with its flawed system, is much better than the strict censorship in Singapore. I hope that the world could work towards a better system where teenagers and adults are treated as sensible humans who are capable of knowing what is right and what is wrong. After all, with the Internet tearing down all barriers, movie censorship is nothing but an useless act prevention of free access to content.
Posted by L. at 12:23 AM